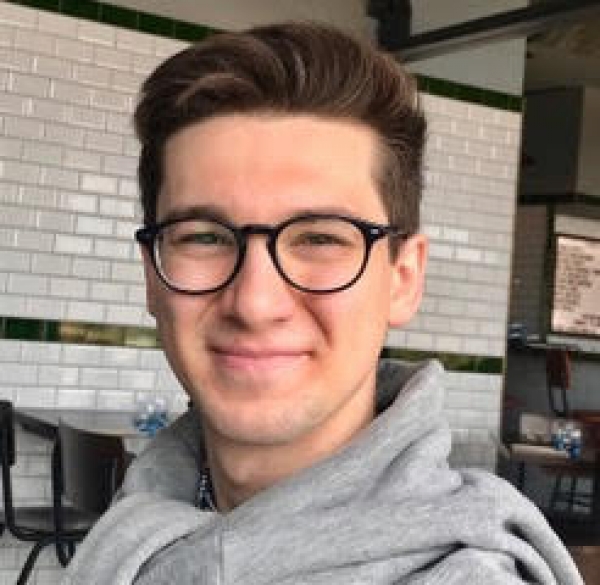 Anthony is a second-year student at the University of Aberdeen, studying for a Bachelor of Music Degree (Hons) alongside his subsidiary (one-semester) subjects Geography and Engineering and now in this second year: Film/Visual Culture and German.

Anthony was born and grew up in Oxford. From 3 years of age he attended Christ Church Cathedral School in Oxford, where he took an active interest in Music, subsequently becoming, at the age of 7, a chorister with Worcester College Choir, an affiliated choir with Christ Church Cathedral School.Later during his schooling, at the age 11, Anthony was introduced to the organ and took some lessons with the Organ Scholar at Worcester College and Dr. Andrew Patterson (FRCO), Organist at St. Giles Church and Blenheim Palace. Anthony also helped with the choral swell there, too, joining the St Giles Parish Church choir in Oxford. Anthony's musical talents were then noted by Dr. Stephen Darlington, the then Director of Music and Tutor in Music at Christ Church Cathedral, Oxford.In 2014 Anthony moved to Scotland, after he was awarded a Music Scholarship to St Leonards School, St Andrews, for his International Baccalaureate (IB) Diploma. For 3 years he wholeheartedly participated in the school's vibrant musical activities, taking part in senior school and public concerts across Scotland, choral singing, piano/organ accompaniment playing, organising visiting organists' recitals from Russia and assisting Edinburgh City Organist (Dr. John Kitchen, MBE) with his organ concerts at Usher Hall, Edinburgh. Outside term time Anthony attended a number of week-long Royal College of Organists (RCO) organ scholar experience taught organ courses at Oxbridge Universities and took organ lessons under the tutorship of Paul Stubbings and organist James Parsons who assisted in Anthony's organ tuition, musicianship and musical development.

In 2018 Anthony worked as a Graduate Gap Year Music Assistant to the Director of Music at Sedbergh Preparatory School, where he produced various pieces of his own musical works and formed a boys' choir from scratch. In this aspect, while at Sedbergh Preparatory School, Anthony organised an organ concert tour around the UK for the Moscow Conservatoire Professor Alexei Schmitov, introducing Professor Schmitov's musical pieces to local community and concert audiences, schools and fellow musicians alike.

Over the past busy University year, Anthony has had the privilege and the unique opportunity to have played at weekly Wednesday Chapel services in addition to a large variety of concerts and other musical events both in the vicinity of Aberdeen and further afield. Alongside Anthony's study towards the Bachelor of Music (Hons) degree Anthony participates in many clubs, societies and other extra-curricular events for example; the Early Music Ensemble and the University of Aberdeen Chapel Choir.

In his first-year Anthony held two organ scholarships, first the prestigious David and June Gordon Senior Organ Scholarship at King's College Chapel, under the tutelage of Dr Roger Williams (MBE) and under the direction of Professor Paul Mealor, the Royal Composer, at the University of Aberdeen and the Organ Scholarship at St Andrew's Cathedral, Aberdeen. In addition to the University organ scholarship, Anthony is in the process of planning an organ recital in Haddo House, Aberdeenshire in the upcoming year.

Anthony has a firm belief in sharing the power of music across varied countries and cultures, to enrich peoples' lives through the beauty of music and its ability to evoke positive emotions. Most recently Anthony participated in a project called iPlay4Peace where he played alongside many talented musicians worldwide in a global orchestra in performing the Scottish composer Thoren Ferguson's composition: Armistice. This year Anthony composed a piece for symphony orchestra for the iPlay4Peace project which will receive its world premiere this year in November in Edinburgh. In the future Anthony hopes to specialise in composition and pursue a music teaching career.