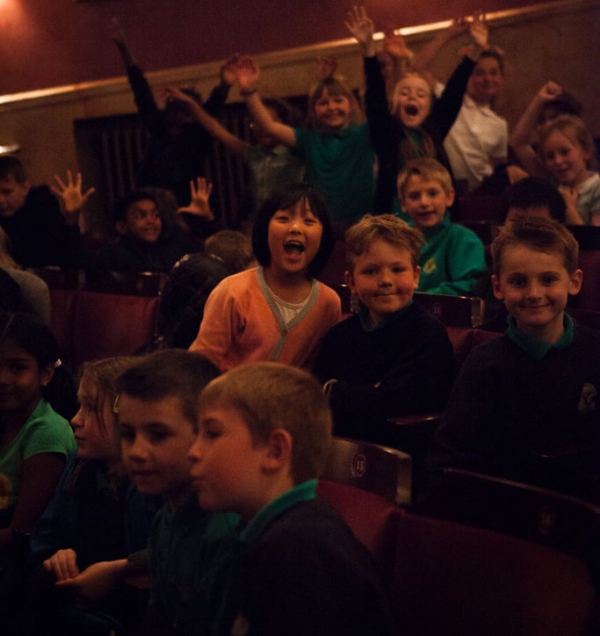 Scottish Opera gratefully received support from the David and June Gordon Memorial Trust towards our Education project, The Opera Factory. From everyone at Scottish Opera, especially our Director of Outreach & Education, Jane Davidson MBE, thank you for your award of £500 in November 2018. Thanks to the Trust's support, we have developed the understanding and appreciation of how an opera is created for 223 pupils in Primary 3 classes (ages 6 to 8) in Aberdeenshire. Together, we increased the accessibility of opera by providing children with a safe, fun and free way to try out live opera at an early age. The project combined participation in a live opera performance with a set of specially-created teaching resources, which were designed to reinforce key learning outcomes of the Curriculum for Excellence.

What Have We Done?

Friday 31 May: His Majesty's Theatre, Aberdeen

In the show, characters Libby Retto and Compo Zerr meet the many people needed to put on an opera; from the earliest planning stages through rehearsals and up to the curtain rising on opening night. These included the director, designers (set, lighting and costume), stage manager and Front of House staff.

This live opera was performed by the 52 players in The Orchestra of Scottish Opera, four singers (a soprano, mezzo, tenor and baritone: the four main voice types) and two actors. Scottish Opera's Head of Music, Derek Clark, conducted the performances. Extracts from some of the operatic repertoire's most famous tunes were played (including The Marriage of Figaro and The Magic Flute), set to new lyrics.

Our cross-curricular teaching pack helped pupils to learn songs with their teacher in advance and familiarise themselves with the aspects of an opera performance. This enabled them to join in and be part of the show. These resources can be viewed online: www.scottishopera.org.uk/join-in/opera-forschools/the-opera-factory-teaching-resources/

What Difference Has The Project Made in Aberdeen?

1,436 pupils attended our four performances, an average of 359 per performance. 29 schools engaged in the project by bringing pupils to a performance and using our educational resources in the classroom – 11 in Glasgow, six in Inverness, seven in Edinburgh and the five mentioned above in Aberdeen.

Over the past two years, teachers have commented that the project has:

We were pleased that St Peter's R.C Primary took part in the project for a second year running and that Fraserburgh South Park Primary travelled from Aberdeenshire to take part. However, we were disappointed not to receive a stronger response from the 51 schools invited across Aberdeen and Aberdeenshire.

We understand that this is a busy time of year for schools. As it is close to the end of the school year, budgets may already be spent or allocated, meaning limited resources to cover the travel costs, particularly for schools further away in Aberdeenshire. We offered this experience for free to reduce financial barriers for schools to take part. However, we believe that this can attach less of a value and commitment to it by some schools to attend.

Last year, we presented performances in a nontraditional theatre space with an open hall, including at the University of Aberdeen. This year, after consulting teachers, we moved the performance from this community setting to a theatre. Teachers and pupils found this to be a positive change that enabled the pupils to receive an authentic theatrical experience where they could appreciate a full lighting design, the curtain rising, the seats and proper acoustics.

After two years, The Opera Factory will take a pause in our upcoming 2019/20 Season. Our Outreach & Education department regularly rotates the projects within our annual programme. This enables us to test out pilot projects – as we have here with The Opera Factory – and revamp proven established projects. The children that have attended The Opera Factory in Aberdeen over the past two years will have the opportunity to engage with their national opera company in the coming year through the following projects and performances in our 2019/20 Season.

The Primary Schools Tour, our longest-running Education project, enables pupils in P5-P7 classes (ages 8 to 12) to learn and perform a 30-minute opera alongside three professional singers. In 2019, 11 schools from Aberdeen and Aberdeenshire took part. Over the past ten years, we have made 88 visits to schools in Aberdeen and Aberdeenshire. This is the eighth and 13 largest out of Scotland's 32 Local Authorities. We are finalising the schedule for our 2020 tour. We aim to maintain this high level of activity in these regions.

We hope that our Pop Up Opera Roadshow – which presents intimate, interactive and abridged opera performances for family audiences in a 40 foot long converted trailer – will provide free performances in Fraserburgh and other locations along the North East coast in May and June 2020.

As ever, we will bring two of our main-stage opera productions to His Majesty's Theatre in Aberdeen – Puccini's Tosca in October and November 2019 and Gilbert & Sullivan's The Gondoliers in May 2020. In addition, our two six-week tours of Opera Highlights will bring a musical mix of operatic treasures to venues in Stonehaven, Ellon and Alford with performances by four singers and a pianist. Anyone aged 26 and under can buy any ticket for a Scottish Opera performance for only £10.

‘This opportunity broadened the pupils' cultural experience and introduced them to a genre of music they may not have been aware of before.' (St Peter's R.C Primary, Aberdeen)

Thank you to The David and June Gordon Memorial Trust for your support to introduce children to the joys of live opera.